Harrowing Story of this Myocarditis Survivor

Paul triumphs over myocarditis and goes onto become a laywer 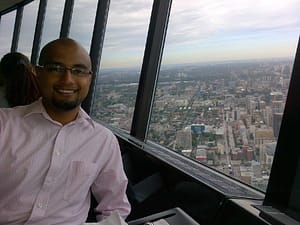 My myocarditis story begins like so many others. I came home from a weekend road trip to Canada. After I came home, I called a friend and had a short conversation with him. I started to draft a paper for school. I remember feeling somewhat excited to write this paper, because it was the last assignment that I had to do before my graduation from Law School.

I remember typing, and all of sudden, I had a partial out of body experience. I remember feeling as if one foot was still inside my body, while the other foot had left my body. I thought to myself, This is really strange; I should probably go to bed.

As I was sleeping, I started to feel ill. I had no chest pains, but began vomiting and experienced cold sweats. Believing that I had only the flu or a cold, I continued to try to sleep. Around 3 a.m. I woke up to find myself sprawled out on the floor. I picked myself up, and continued to sleep. At 5 a.m. my alarm went off. I forced my eyes open, because I had no energy to open my eyes, and then crawled out of bed. On my hands and knees, I crawled to the bathroom. I attempted to take a shower, but realized that I was too weak to do so. Instead, I began to draw water for a bath.

I crawled into the bath tub. I went unconscious almost immediately the next thing I recall was waking up outside of the bathtub, and lying in a puddle of cold water. I thought to myself, How long have I been asleep?

I got out of the tub, and went back to my bedroom. I called in sick, telling my boss that I was feeling under the weather. My hope was to return later that afternoon. The rest of the day was no less than a struggle. Numerous times I tried to walk to get some water, but could never reach the sink in time. Each time, I would end up on the floor, waking up and feeling disoriented. I kept thinking that I was tired and had the flu, causing me to drift in and out of consciousness. After I hurt my ribs and jaw, I finally realized that I am not falling asleep on the floor. I am passing out.

I called my father, a doctor, to tell him about my day. He told me to go to the hospital. I called a friend, and he picked me up. When I arrived at the hospital, the intake person did not take my story very seriously, even though I explained that I have been passing out all day. An hour later, the doctors check my weight and heart rate. At this point, they realize that something is wrong.

My heart rate was between 25-30 beats per minute. I remember the doctors telling me to stay awake, and to focus. They wanted to know whether I had a history of heart problems. I told them that this was the first time something like this happened. I remember throwing up.

My parents drove to the hospital, which took several hours since they live in another state. The next day I was in a lot of pain, and experienced aspirational pneumonia, fluid in my lungs, and swelling in my brain. The doctors installed a temporary pacemaker. As the oxygen levels in my blood continued to drop, they eventually had to put me on a respirator. I have become comatose.

A few days later I am taken from New Hampshire, to Massachusetts General Hospital, still unconscious. but the next thing that I can remember is waking up in Massachusetts. I was in the ICU in Boston for at least a week and half, and then began to make a recovery. About a week and half later, I was out of the hospital, and was recovering. As soon as I came back from the hospital, I had to prepare for graduation and begin studying for the Bar Exam.

My recovery was difficult, and is still ongoing. In July of last year, less than three months after leaving the hospital I took the Bar Exam. In October, I found out that I had passed.

There isnt a day that goes by that I dont think of all the survivors and victims of myocarditis. It truly is a devastating illness, and like most people, I had never heard of it.