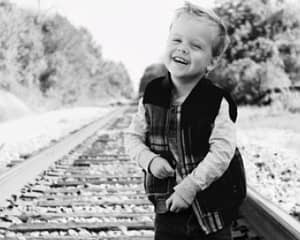 From day one, our four year old son Fletcher has been a ball of energy, only slowing down to sleep. The week of Labor Day 2015, Fletch, along with several other kids at his daycare, had a terrible cough. Like the other parents, we took Fletcher to the doctor where they said he had croup and gave him a steroid shot to open his airways. Something just wasnt right though. Two days later, while the other kids were getting better, Fletcher was worse and had a fever that wouldnt break. He went back to the doctor where he was swabbed for flu and RSV. They also did an X-Ray of his chest to rule out pneumonia and a CBC. According to all of the tests, he was fine, just battling a virus. We took him home with hopes that we were finally on the mend.

The next day Fletch was even worse, we had never seen him so sick. Our baby, who was NEVER still, hardly moved and his face was very swollen. We went to the ER that afternoon where he was diagnosed as being very dehydrated. We were advised to stay the night to get fluids and were discharged the next day. Fletch did seem like he was a little better, but he was still very swollen. We left the hospital that evening, picked up our little girl, and headed to the house to settle in. When we got home, Fletch played a little and asked to go used the restroom. While he was using the restroom, Fletch crumbled to the floor and we immediately called 911. We had only been home from the hospital for an hour.

Shortly after the ambulance took us back to the ER, Fletch lost consciousness again. The next thing that happened was like out of a movie, every doctor and nurse on the floor ran to our babys room. At that moment we were living our worst nightmare. Still none of Fletchers symptoms were making sense, nothing was adding up. The ER doctor decided that the best plan of action was to start at his head and work down until they could figure out what was causing this. After his CT scans came back normal, they decided to do an echocardiogram of his heart. While doing the echocardiogram they found that Fletchers heart was enlarged and surrounded by fluid. The culprit was Myocarditis cause by the virus he had been fighting all week.

Our son was in heart failure, and we had no idea if we would hear his voice or see his smile ever again. The only thing we knew to do at that point was pray to God and ask Him to please spare our sons life. The ER doctors and nurses were finally able to stabilize Fletch, and they sent him to the PICU. That night was hard, but by Gods hands Fletch pulled through. After several rough days, with Fletchers heart and lung function steadily on the decline, they decided the best thing for him was to remove the fluid from around his heart. After a heart catheterization, Fletcher finally began to improve.

On day six in the PICU, he was moved to the Cardiac floor where he improved even more. Fletch is a very blessed Myocarditis survivor, his heart made a full recovery. We are so thankful for the wonderful doctors and nurses at Blair E. Baton in Jackson, MS. Through this we learned to put our complete faith and trust in God. After all, He is the Great Physician.