Our life forever changed July 15, 2017.Before that Beau was a happy two-year-old who didn’t get sick often.

Before that Beau was a happy two-year-old who didn’t get sick often. He loved the outdoors no matter how cold it was. If the sun was shining he would say, “mom the sun is out, I go out and play?” And there I would sit, drinking my coffee and watching him play early in the mornings. He had a smile that would melt your heart, and the best belly laugh. He was smarter than his age due to growing up with two older brothers. He loved riding on the tractor and lawnmower with his dad and the bond he had with his dog was like no other.

On July 5, 2017 after being up late from a family 4th of July party, Beau woke up with a red swollen eye. I called the doctors right away and got him in. They didn’t know what it was, but put him on a strong antibiotic and wanted to see him back in ten days. We left two days later for a family vacation to Tennessee. Beau’s eye was better the morning we left, but I continued the antibiotics as directed. We had a great time in Tennessee enjoying the mountains. We were there for six days. He was playing and enjoying every minute of it. We came home on July 12, 2017. Everything seemed normal with Beau. 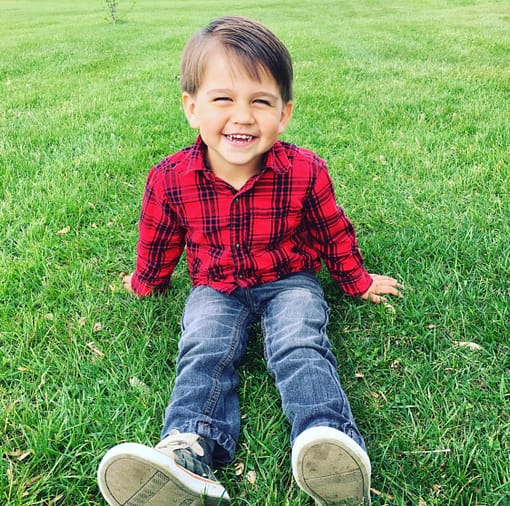 The next day we were outside almost all day playing and by evening he said he peed his pants. That was unusual for him because he was really good about going to the potty when he had to go. Well he didn’t pee his pants, he had diarrhea. I got him in the shower and told him it was ok, we would rest for the rest of the night. He only had it for a short time, not even overnight. The next morning July 14, I had to return to work at a daycare where Beau also went with me. I told him he’d have to stay home with his dad in case he was still sick, we didn’t want to get any other kids sick. When I returned home from work my husband said he took more naps then normal. I thought it was because we had been on vacation for six days with no nap schedule so of course he’s tired. Not too long after I got home he went right outside and played. We ate his favorite meal that he picked out, pork chops and rice with green beans. He ate it all. He went back outside and played with his brother.

That early morning of July 15, he woke up around three a.m. saying his belly hurt. I checked his temperature and he had no fever. I gave him some Motrin and rocked him back to sleep. We fell asleep on the couch. He woke up three hours later puking. I thought he had the stomach bug. Still no fever. We cuddled on the couch for a few hours, but every time I’d try to get him to drink something it would come right back up. By noon I decided to take him to the ER because he couldn’t keep anything down. My older son who was 11 and I took him while my husband and my ten-year-old stayed home. I told them I’d call if they said it was anything serious.

We got to the hospital and checked in. We didn’t have to wait long and they called him back. I set him down on the bed and he acted like he was going to puke again. I grabbed the bucket the nurse gave me and he started having a seizure. Everything happened so fast. They thought it was just a febrile seizure and he would come out of it. They were wrong. He stopped breathing. They called code blue and pushed me out of the room. They worked on him for almost 2 hours and couldn’t get his heart to beat on its own. Our whole family waited in a tiny room for almost 2 hours and then the worst sight ever was seeing the whole team of doctors who were working on our son come in crying telling us they don’t know why our two-year-old was dead. All they could tell us was his heart was very sick.

Five months after he passed we got his autopsy and it said Acute Lymphocytic Myocarditis (likely viral). Until then we had no idea what that was, we never heard of it. Beau was taken two months before his third birthday. He was cut short of a future because of Myocarditis.