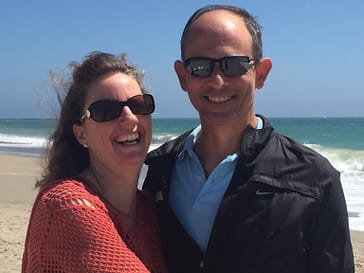 My story starts on Thanksgiving Day, 2015.  It was a beautiful day, and I had so much to be thankful for — a wonderful wife, two children in college, a good job, a nice home, and I was healthy so far as I knew.  I had just turned 50, ran regularly, and lived a healthy lifestyle.  The day after Thanksgiving, we put up the Christmas lights and decorations.  That day I began to notice a bit of double vision, and each day it got worse.  The optometrist I went to see referred me to an ophthalmologist.  The ophthalmologist said I needed to see a neurologist.  And so, I was finally able to get appointment with a neurologist on December 10.  By that point, my eyes were swollen, and the double images were not even close together.  He told us that my symptoms could be a number of different conditions, but they were all serious, and recommended the eye institutes at USC or UCLA.  We went home and tried to get an urgent appointment.  That evening I came down with a fever.  The neurologist told us we should go to the emergency room, so my wife drove me to the UCLA Medical Center.  They took vitals and hooked me up to heart monitor.  Nurses and a doctor then rushed into my curtained off room asking, “Do you feel okay? Because you’re having a heart attack.”

A team of UCLA doctors worked diligently to stabilize my heart and diagnose my condition.  My third day in the hospital, my heart stopped.  I flatlined for 27 seconds.  The next thing I remember is my wife yelling, “Don’t leave me! Stay awake honey!” as they rushed me to a procedure room to place an Impella (a small pump) through an artery in my leg all the way up to assist my weak heart.  They also installed a pacemaker, and actively used it to keep my heart rate up.  During the procedure my wife contacted our kids and my parents to come to the hospital.  It was apparent that things were going downhill fast, and it was made clear my heart was extremely weak and unstable.  The next day extended family had gathered at the hospital and took turns quietly visiting.  Friends and colleagues were told, “He’s hour to hour.”  The following day, I had a second “Code Blue,” and the day after that, a heart biopsy was performed to help diagnose my condition.  A Swan catheter showed that my heart was operating at just 15% of normal capacity, and that was with the assistance of the Impella.  About this time, my wife started a “Friends & Family” Facebook page, and in no time, hundreds of followers were joining us in prayer.

On December 18, my team of doctors walked into my room with a diagnosis.  The heart biopsy revealed an extremely rare disease called Giant Cell Myocarditis.  Most cases are discovered in autopsy.  Virtually all of those that do survive require a heart transplant.  The disease was causing my immune system to attack my heart and the muscles of my eyes.  The damage to my heart was likely permanent.  The onset and progression of the disease is rapid, and even with a heart transplant, the chance of disease reoccurrence is high.  It was a grim diagnosis.  But God had blessed me with a tremendous peace that came from knowing that He was in control of even my circumstances. God blessed us with a wonderful cardiologist who was familiar with my rare disease, the brilliant Dr. Mario Deng.  He had successfully treated at least two Giant Cell Myocarditis cases prior to my own.

After celebrating Christmas Eve in the hospital with my family, I had my third “Code Blue.” By New Year’s Eve, the doctors informed us that it was time for plan B, time for a heart transplant – I was not urinating, edema was worsening, and my numbers were very unstable.  Shortly thereafter, the decision was made that I would undergo open heart surgery on January 2, to install a ventricular assist device (VAD).  VADs are typically a life sustaining “bridge” until a heart becomes available for transplant.  The VAD was only FDA approved for the left ventricle, but my heart was so weak that the surgeon wanted permission to have the option to place a VAD on the right side as well if necessary.  The surgery lasted over eight hours, and he did put in two VADs, both left and right.

On January 8, they listed me as 1A status on the Heart Transplant Waiting List, the highest and most urgent status. The average wait time on the Heart Transplant Waiting List is four months, and it did not appear that I would make it that long.  Miraculously, the very next evening I received a call from Dr. Deng that he had received word of a heart that would be a match for me.  My brother and I were in the room together that night, and when I hung up the phone, we broke down in tears, thanking God for His merciful answer to our many prayers.

January 10 was my second open heart surgery in eight days. After over 10 hours of surgery, the surgeon let my waiting family know that the heart was good, that the surgery went well, and that I was doing fine.  Within two days, they had me up on my feet, walking.  And within less than two weeks I was able to return home after 42 days in the hospital.  At the time of this writing, I am four-and-a-half years post-transplant.  Praise God, I have had no rejection and no recurrence of the Giant Cell Myocarditis.  By God’s grace, I was able to return to my job as a middle school principal roughly six months after transplant, and I am still working in that capacity.  I was able to see both of my kids graduate with their college degrees, and just recently was blessed to be able to walk my daughter down the aisle.  Thank you, Lord, and God bless all the incredible medical professionals at UCLA!