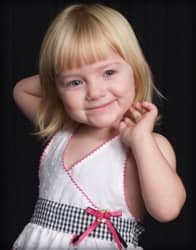 Cathrynne was such a joy to everyone who knew her.  Her smile could light up a room and she always knew exactly what she wanted.  She was beauty and spunk in a small package.

On a Thursday afternoon, Cathrynne started vomiting.  We gave her fluids to keep her hydrated, but the next morning, when she was still throwing up, we took her to the pediatrician.  He believed she had a stomach virus and prescribed medication to settle her stomach.  After getting the medicine, she started to keep down fluids and had a typical lazy day at home.

Saturday, she was still keeping down fluids, but was not eating solid foods.  She stopped throwing up, but she still seemed weak.  Since she was keeping down fluids, we expected her to start to tolerate solid food the next day; however, on Sunday morning, she was even weaker.  Her breathing became labored and her heart began to beat rapidly.  We rushed her to the emergency room.

The doctors ran tests and took x-rays.  They informed us that she had pneumonia and needed to be taken by helicopter to a children’s hospital.  Just as the helicopter arrived, our sweet little girl went into respiratory arrest.  The doctors, nurses and flight team worked valiantly for more than an hour and a half to revive her.

No one could tell us how something like this could happen so suddenly to an otherwise healthy child.  Every day, children have stomach viruses and parents never think that it will take their children.  We were left with our grief to wonder what caused this to happen to our family.