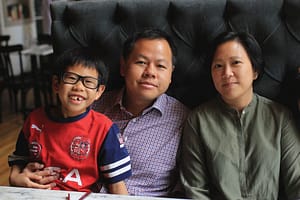 We once had a perfect life, a completely bright future and lots to look forward to. Our perfect life was
shattered after a tragedy that will scar us for the rest of our lives.

Christopher was our first son. He had a younger brother who loved him very much too. Christopher was very loving and kind to his parents and his friends. He was always loved everywhere he went.

Ever since he was born, Christopher had shown signs of quality of a person we could only dreamed of. He was very persistent and hard working. He showed great interests in everything he laid his eyes and hands on. He was tri-lingual by the time he started walking. By the age of 6, he knew the facts of all dinosaurs, memorized the names of our presidents, knew the facts of every states in the United States and countries in the world. He was also a very accomplished pianist. Three months before he left us, he won the spelling bee championship of Hoboken NJ. One week after his passing, we received a letter from John Hopkins Center for Talented Youth congratulating us that Christopher had won the High Honor award.

More importantly Christopher showed abundant love for God and other human beings. He was always very appreciative of what he had and we were able to afford for him. He volunteered himself to anybody he saw needing help (and gained many great friends along the way). I learned a lot to be a better human being from him. My wife and I counted our blessings for having him, and had very high hope for his future. He literally gave us the best 10 years of our lives. On July 3rd 2015, a day before his favorite holiday, he complained of discomfort and fever. The whole day he rested at home and watched TV with us. We gave him fever reducer and lots of water. In the evening he threw up and felt very weak. Near midnight he struggled to breathe and showed signs of seizure. By the time the ambulance arrived, I was already performing CPR on him. An hour and a half of attempted resuscitation, we lost him.

For many months after his passing, I was struggling to come to terms with the loss. Even now writing this is painful. How could life give us such a perfect son, but then just took him away without any warning, and without even giving us a chance to say good bye. Chris passing took away a big part of our lives.

A few months later, the medical report eventually showed that he died from Viral Myocarditis. This prompted us to learn more about this terrible disease. It will be a lifelong promise of us to educate others about this disease and hopefully raise awareness and funding to prevent this kind of loss on other parents.