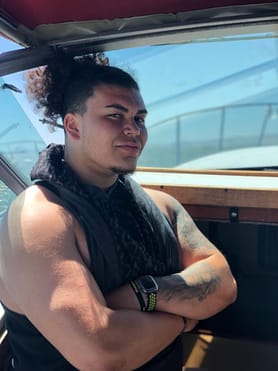 Christopher Emmanuel Leveque was born on August 15th 1997. He arrived earlier than expected, one month premature and even as a preemie he showed signs of great strength.

Chris was very much indeed a bouncing baby boy. He was always jumping, hopping, running head first into as many objects as he could.

He loved cooking and had the privilege of making a special dessert every Thanksgiving and Christmas holiday. He was also a talented artist and several of his drawings are framed at home.

His first sport was not promising. During T-ball practices, he would squat down and play in the dirt, completely ignoring the coaches and the game itself. Well, that didn’t last long, Chris grew to LOVE basketball and played on many competitive teams from elementary school through high school. However, his passion for football took over. His first year in high school landed him on the Junior Varsity team. From Sophomore year through senior year, he was on the varsity football team and special teams. He went on to play college football, which ended abruptly due to COVID-19 restrictions in 2020.

During his last months at home, he was preparing for his last year of college. He had a strict workout routine at home; running five days a week, followed by weight lifting and working out in the backyard.

Christopher’s positive impact was so much deeper and wider than his family knew. He was often called the gentle giant. His brotherhood bond with his football friends is so unique and inspiring. Only some of us are so lucky to have such great friendships.

Christopher’s life was suddenly cut short, unexpectedly and unfairly due to a rare life-threatening medical phenomenon known as Giant Cell Myocarditis – GCM. Christopher had no prior symptoms or illnesses, other than his friends saying that he complained of a fleeting chest pain about three weeks beforehand. He awoke the morning of Saturday March 20th and mentioned that he was having rapid heartbeats for a few days. Being the weekend, we discussed that he should go to the ER. We communicated back and forth for several hours while he was at the hospital. Apparently, his troponin levels were already high (14ng/ml) upon his arrival. At one point he mentioned that he would probably be heading home soon. His last text to me was, ‘they want me to do this test’ – it was an angiogram. About 40 minutes later, I received a call from the hospital indicating that Christopher had coded. WHAT!!! Somehow, I made it to the hospital shortly thereafter. They performed CPR for over 90 minutes on Christopher. Then he needed an ECMO machine and was transferred from John Muir Hospital to UCSF. His body temperature was lowered while on the machine to allow the body to recover and / or heal. We stayed by his bedside hoping for a miracle. I just wanted my son back. He was just starting his life and had so many plans ahead of him. I had to make the very tough and awful decision to remove my precious son from the life support machine on Wednesday March 22nd. His brain activity was completely gone due to the lack of oxygen for the prolonged period of time.

Our lives are forever changed, his two sisters and mom, are doing everything we can to keep Christopher’s memory alive. He did not deserve to have his life cut short. Our hearts are torn apart and our lives will never be the same again without Christopher.

Forever in our hearts is where you will always be Christopher.