As told by his mom, Patty Edgeman

We lost our son to this unheard of disease on May 17, 2016. Clayton was 29-years-old, a wonderful father, son and brother. He was a friend to everyone as well as a peacemaker. He avoided arguments but could debate anything with anyone and loved to make people laugh. He graduated with a degree in criminal justice, but he loved his work as a cook in our local popular restaurant. He had not been sick, not missed a day of work nor a day with his son. 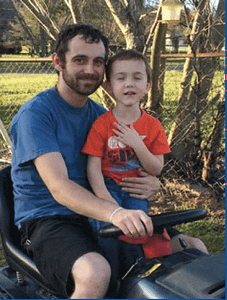 Exactly one week before he died he got the chance to go hiking with some friends. The next day he came to mow my lawn and just casually mentioned that he didnt realize how out of shape he was. He wasnt the type to complain about anything. It was dismissed as just thinking he hadnt gone hiking in a while. After he cut the lawn, he came inside for dinner and after that he went home with his son. No other complaints were mentioned. I had seen him Thursday and Friday that week as usual when he brought his son over on his way to work.

On Tuesday of the following week, it was his routine to bring his laundry over, get his paycheck and go do his grocery shopping. The morning progressed and after calling him and texting him numerous times without a response I got very worried. After I got off work, I drove by the restaurant where he worked and did not see his car. I knew then that something was wrong, Clayton never missed work, never! I drove to his apartment and while calling out his name I found two of his co-workers walking out of the door. We rushed in to find my son had died. I was shocked and broken, I couldnt believe that my baby was gone.

After three months we found out that he had died from Myocarditis. He hadnt been sick and hadnt complained. The day before he had spent the day with his 4 year old son, took him to the park and had a great dayHow can this be? How can something so deadly be so silent?

I turned to the Myocarditis Foundation website for answers and plan to focus on fundraising and raising awareness to our community about this strange and deadly disease.

With love to you forever Clayton,