He was seen by his doctor for a mild cough… 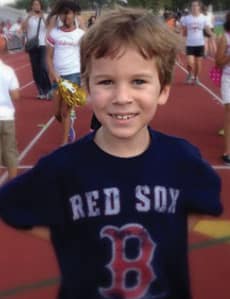 Connor Andrews was an 8-year-old boy who had just finished the 2nd grade. He was a force of nature who greeted life with excitement and optimism. He was a gifted reader, aspiring inventor, and clever problem solver. When the school year had ended he traveled with his family on an Alaskan cruise. Connor had an amazing time seeing glaciers, bald eagles, whales and so much
more.

Two days after returning back home to Texas, on a Wednesday, Connor started to have a minor cough. On Thursday, we took him to his pediatrician because the cough had gotten worse. The doctor prescribed some antibiotics but really wasnt concerned at all.

In the middle of the night, early Friday morning, Connor began vomiting. He spent that day in bed watching some of his favorite TV shows and playing his tablet games. Throughout the day he was drinking small amounts of fluid and eating plain crackers. His younger brother had just recovered from three days of a stomach bug and we just assumed it was going to run the same course for Connor. By late in the afternoon Connor was still feeling sick and just rested in bed. The most concerning symptom was that his hands had become cold to the touch. We called the pediatricians office and the nurse gave us the symptoms of dehydration to watch out for because that was their main concern. By that evening we decided that he needed to go to the Emergency Room because we feared Connor was getting dehydrated and hoped some IV fluids would help.

At the hospital, after seeing the triage nurse, Connor was immediately brought to a treatment room because his blood pressure was very low. When they tested his blood it was highly acidic but they could not determine the cause. He was admitted to the pediatric ICU. The doctor had him on IV fluids with alkaline to treat the acidic level of his blood. They did an ultrasound of his abdomen to rule out any organ problems or an appendicitis. A virus was then suspected and lab work was ordered. At that point they said they would observe him for the night.

Connor had a long night in the hospital but was still himself, smiling and talking. But by the morning he had not improved at all. Connor asked for a drink of water and after a few sips he started dry heaving and told us that he was dizzy. That was the last thing he said.

The nurse and doctors rushed in but he was already going into cardiac arrest and they had to bring in the crash cart. Even at this point the nurse told us to stay positive, that it looked much worse than it was. She reassured us that they were going to stabilize him and continue to figure out the cause of this condition, still a suspecting a virus. The doctors and nurses continued to try to stabilize Connor but every time they restarted his heart it would fade out again. They worked on him for over an hour, giving him higher and higher doses of adrenaline to restart the heart. Each time it would start and but would not sustain itself. The doctor told us that she was very concerned for Connor and soon after she said that she did not think they could do anything more for him.

A minister was there to say a prayer over him. Then at 8:30am, with his mom and dad at his side, Connor was taken off the ventilator and CPR was stopped. Connor passed away that Saturday morning – June 7, 2014. He was supposed to be competing in his neighborhood swim meet with his friends.

A couple weeks later we learned from the coroner that Connor had died from Viral Myocarditis, caused by the flu virus. There was evidence of flu in both his lungs and his heart. Connor was a healthy, active boy up until that terrible day. He is missed by so many who loved him! He had a knack for seeing past any judgment and touching many with his ability to greet all
as a friend. He would have done uncommon things in this world, which he truly loved.