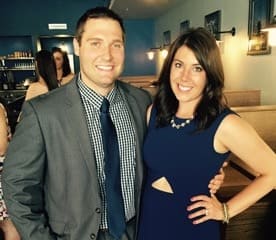 My name is Dominick Oliver and I am a Giant Cell Myocarditis survivor.Ten years ago, I was diagnosed with GCM. My sophomore year of college just ended and I was enjoying summer vacation with my friends. I was a collegiate football player back then so a lot of time was spent working out to stay in shape for the upcoming season. However,at some point during the summer my health took a turn for the worse. Originally, it didnt seem like anything out of the ordinary.It really felt like I was developing some
sort of flu because I had trouble keeping food down and was tired all the time. Given the situation, I thought it made sense to take some time off. I didnt realize it,but something was seriously wrong.

After taking a few days off I attempted to rejoin my friend for our normal workout routine. However, I quickly realized that wouldnt be happening any time soon. My strength and stamina completely diminished to the point that I had to lay down after our first exercise. My head was spinning and it felt as though I passed out.At this point the only thing I could do was go home.

That night I told my parents exactly what happened and
my mom decided enough was enough. She was a lab technician at our local hospital and decided that running some blood work would be a good idea. Call it a mothers intuition, but she knew something was wrong. That night she called my father and explained that the results of the blood work indicated that something might be wrong with my heart. My father calmly broke the news to me and said we needed to head into the hospital. The doctor and nurses immediately started conducting tests and in the background someone mentioned it appeared as though I was having a heart attack. I couldnt believe it! This one statement worked me up so
much that it caused a spike in my blood pressure, causing me to pass out on the table. When I woke up, my parents told me that I needed to be transferred to UPMC Presbyterian Hospital to be treated by Dr. Dennis McNamara.

When I arrived at Presby it was the start of the longest night of my life. Doctors and nurses were constantly in and out of the room. Id be a surprised if I managed two hours of sleep that night. All I remember is being poked, prodded and rushed around the hospital for all kinds of tests. The real challenge with GCM is making a proper diagnosis. After that hellish night, my original diagnosis was Viral Myocarditis. However, days went by and I wasnt responding to treatment so Dr. McNamara ordered me a heart biopsy which determined that Giant Cell was the culprit.

Up to this point the doctors treating me made it very clear that GCM was the form of Myocarditis you absolutely do not want. Im not making light of other cases of myocarditis but when you are twenty years old and hear that even with proper treatment, the rate of death or heart transplantation is still only slightly less than fifty percent, youre going to be a little rattled. My parents were in the room so I tried to keep it together. I
didnt want them to see how frightened I was. So many thoughts started rushing through my head but none more frightening than coming to the realization that I was completely helpless.There was no controlling this situation.

From what I understand, Dr. McNamara consulted with Dr. Leslie Cooper at the Mayo Clinic and developed a medication plan to treat me. Im glad they collaborated, because over time I started to make progress. My heart started healing and I grew increasingly more impatient in the hospital. Looking back on it, I probably owe Dr. McNamara an apology because it couldnt have been easy dealing with me constantly pushing to be released. I just wanted to get back to a sense of normalcy. He actually said that one day I may be able to fire him, but for now we had to approach this situation with caution. He was very clear to express the limitations that this disease would put on me. Early into my recovery I was limited physically so football and most forms of exercise were out of the question. He also reinforced the importance of staying regimented with my medications. I was given the chance to survive this disease that claimed the lives of so many before me. The fact that I was given this chance was a miracle.

Over time, my health continued to improve and Dr. McNamara was able to share the news I was waiting to hear for so long. It was finally time to go home! However, after spending 1.5 months in the hospital, my recovery took toll on me physically. When I entered the hospital I weighed 213lbs. When I left I was a frail 173 lbs. It didnt matter. I was going home and my spirit was back.

Do I consider myself lucky? I absolutely do, but my saving grace was a quick diagnosis. Today, I am thirty years old and celebrating my five year wedding anniversary with my lovely wife. I have a great deal to be thankful for and this experience has taught me a lot. Most importantly,battling GCM has reinforced the importance of taking care of my body. GCM in itself is a mystery in many ways. Not much is known about what causes it and diagnosing the disease is very difficult. That is exactly why it is important to know your body and pay attention to what it is telling you. If something doesnt feel right you need to check with your doctor. I truly believe that being self-aware is a major part of beating GCM. It also doesnt hurt to have a ridiculously intuitive mother in your corner.