As told by Garret’s parents 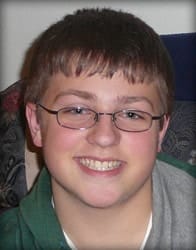 Garret Lee Hodges was a loving, funny and smart 15 year old boy. He was our first born child, a big brother, a grandson, a nephew, a cousin and friend to many. Garret loved life, family and friends. He also loved his hobbies with a passion; dirt bike riding, Xbox, air soft and texting friends.

Dates and times are not clear in my memory as we were in such a fog for so long. That first morning Garret called me to let me know he didn’t feel good; he had a headache and wanted to stay home. He stayed home that day, played Xbox, texted friends, and rested.

The next day he was feeling worse, he was running a fever of 103 degrees and started vomiting. Nursing advice was to treat him for the flu. The third day, he continued to be tired, feverish and still slightly vomiting. Same nursing advice, it was flu season after all. We went to the doctor that morning. They were quite concerned thinking he was dehydrated so they started giving him IV fluids which (unknowingly) caused his damaged heart to work too hard.

He went from the Dr.’s office to the hospital in the slowest ambulance ride ever. They took him right in and I remember the attending doctor saying “we have a really sick kid here”. They were going to get him stabilized and take him to ICU. The ER doctors still did not know what was taking our son. Garret’s heart stopped on the elevator. It was a couple of months before we received the diagnosis of Viral Myocarditis; it was determined with a heart biopsy.

It is so important to our family that others do not have to suffer as we have. Awareness and education are key! The loss of our son has made us so aware that nothing is in our control. Garret walked into the doctor’s office that day and did not come home. We all have lost a true treasure, our son Garret.