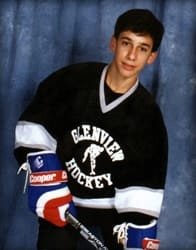 My older brother, Jeremy, was a seemingly healthy 14 year-old who was active, healthy, and bright. He was on the academic honor track at his high school, participated in varsity hockey and cross country, and was an exceptional role model for myself and our younger sister, Lauren.

His drive to succeed, good nature, and kind heart made us all proud to have him as a big brother and son.

After going to a movie with his friends one Thursday night in 1994, Jeremy began to have flu-like symptoms. His pediatrician advised us to give it a couple of days, and let the virus run its course.

On Sunday, when Jeremy’s mild symptoms suddenly became more severe, we brought him to the emergency room, and Jeremy ended up in the intensive care unit before there was enough time to grasp the severity of the situation.

Jeremy experienced a severe episode of rhabdomyolysis, which resulted in kidney failure and a fatal disruption in his heart rhythm. We later learned that Jeremy’s illness was a result of viral myocarditis.

This devastating disease abruptly ended Jeremy’s life prematurely, with no warning sign. Although Jeremy is no longer with us, I’ll always be the middle child, as his legacy lives on in us through the lessons we learned from him and in the many ways in which he touched our lives.