As told by Julian’s mother

Julian was a beautiful person inside and out. He was full of life and love. He made our family what it was. His charming personality made anyone that met him, fall in love with him. He was always making people laugh and putting on a show. He was a very active little boy. He played baseball since he was 3-years old and he absolutely loved to dance, since before he could even walk. Julian also became a big brother in July 2011 and he lived for his little sister. Their bond was so strong. We never would have thought we’d lose such an important person, so soon. 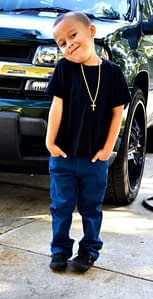 Julian passed away on September 8th 2012 after complaining of only a headache. He had been at the doctor just two days before he passed for a physically and he was perfectly fine, he wasn’t the least bit sick.

On the day of September 8th, I had Julian at the doctors for his headache by 11am-noon. We waited an hour to be seen by them. Julian had threw up in the waiting room and by then they called his name and brought us into one of the rooms. He was laying down and he looked very pale and very weak but he was talking to me and telling me that he was okay. The doctor tried to take blood, she pricked him about 3 times and couldn’t get much if any blood at all so she told me calmly to take him to the hospital for a brain scan. I then started to panic but I told Julian and myself that everything was going to be okay.

As soon as we pulled up to the Emergency room doors Julian was gasping for air and just seconds after they got him into the trauma room his heart stopped beating. They tried to revive him for 40 minutes and they couldn’t.

That day, an enormous part of me died. Nothing seemed real and it still to this day doesn’t. I’d give anything to change what happened that horrific day.

3 months later we were told that his cause of passing was Acute Myocarditis, something I had never even knew existed until now and I knew right away that I needed to know more, I needed to do something.

Our family has a huge void that can never be filled and a little girl who will grow up without her beautiful, one of a kind brother. We have decided to start a foundation that will forever keep Julians memory alive and that will raise awareness to this silent killer that many people have no idea about. We plan to share stories, hold events and fundraisers for Myocarditis research. This is now a part of our lives forever and we will keep fighting until the end.