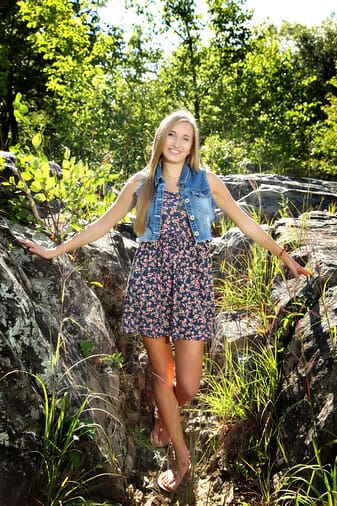 On Friday, December 30th, 2016, I called my Mom from the floor of my room sweating and crying because I felt like I was about to pass out. The room was going dark, I was lightheaded, my heart was racing at speeds it had never reached before, and I wasn’t able to yell to my sister and Dad that were just one floor below me. For over a week prior to this, I had not felt right, but I had just finished my first semester at college and figured I was just tired and recovering from the stress of it all. Christmas Day was the first day that I noticed that it was my heart that was beating funny and causing me to feel lightheaded, dizzy, and nauseous. My parents figured it was a form of stress or anxiety from the end of my semester and decided to just watch it for a few days. The feeling kept coming back so my Mom took me into the clinic in my town three days later. While I was there, they performed an ECG and everything came back normal except that my heart rate was between 110-120 beats per minute. The normal heart rate is 60-100 beats per minute so mine was just a little fast. The doctor told me to go home, rest, and drink water because it probably was just stress and dehydration.

Two days later was when my Dad found me on the floor of my room pale, ice cold, and sweating. By the time my Dad got to me, I couldn’t see him at all even though he was right in front of me, but I could hear him talking to me and trying to keep me from losing consciousness. Immediately, my parents took me to our local ER. When they got me hooked up to the machines, they found that my heart rate was fluctuating at sky high rates. I laid there for three hours as my heart rate jumped all over at rates from 130 to 290 beats per minute. Every time my heart rate went over 200, the machine would start beeping and I just laid there knowing that the alarms going off were for me. I was in Ventricular Tachycardia and the doctors could not get my heart to come out of it. They tried countless ways to get the rhythm to break before they gave me medications through an IV. The first medication they tried didn’t work so they doubled the dose and gave it to me again, but that still didn’t work. The next medication they gave me helped more than the first but it was still unable to completely stabilize my heart, so they decided to transfer me to a bigger hospital. My parents watched as the doctors gave their 18-year-old daughter baby aspirin, loaded up the paddles, and took her away by ambulance with the sirens blaring to a hospital an hour away.

I spent that night in the ICU at Gundersen Lutheran Hospital after they did an echocardiogram of my heart. The first doctor that came to us at Gundersen Lutheran told us that she thought I had a defect in my heart that I was born with. With this news, I sat there astounded. I had been an athlete my entire life and had always been an exceptionally healthy kid. I played volleyball throughout high school, went to State for track, and had been a dedicated figure skater since I was three years old. How could something have taken this long to show up with my heart after being so active? The next day that question was answered when the fifth doctor to see me determined that I had Myocarditis. Since it was New Year’s Eve, the doctors there decided that I needed to be transferred to another hospital that was able to do an MRI sooner and was able to provide me with more intensive care. So, they loaded me in the ambulance for another ride to a new hospital that was two and a half hours away.

I arrived at UW-Madison Health that evening and spent New Year’s Eve in the Cardiac ICU with my family. On New Year’s Day, the doctors came in to talk to us and they told me that my Troponin levels were extremely high at 39. They also determined that I had fluid in my lungs because they had been giving me so many fluids through an IV, but the good news was that my heart rate was fairly stable. On January 2nd, they took me for the MRI and later a CT scan. The results from those tests confirmed the diagnosis of Myocarditis. After that, I spent the next few days in the hospital recovering. The day before I was released, a heart transplant doctor came in to speak with me and tell me I was being treated as a heart failure patient. It was the most humbling and terrifying moment of my life. Once I was released, I returned home with a month to regain strength before returning to college. I was able to return to college on time with a lower class load and restrictions on daily life.

At the time, it was believed that after six months I would be fully recovered and able to return to normal life since I was diagnosed as a mild case of acute Myocarditis. However, in the following six months, the areas affected by inflammation on my heart did not improve. After discovering that, I was referred to Mayo Clinic to see the expert, Dr. Leslie Cooper. After my MRI in May 2018 showed still no improvement in the areas that were affected by inflammation, it was determined that as of now it is believed to all be scar tissue on my heart. This scar tissue causes me to still have periods of Ventricular Tachycardia that make me feel like I am going to pass out but medications help with that. After a year and a half of no physical activity, I have finally been released to slowly return to being active, but there will always be some limitations on my abilities because of the scar tissue. There are so many unknowns and mysteries about the causes and repercussions of Myocarditis that make this disease terrifying, but I am slowly learning how to live with the effects from this disease. I am extremely thankful to still be here with the support of my family and friends while I continue to live with the effects of Myocarditis. I am also thankful for Dr. Leslie Cooper and the Myocarditis Foundation for bringing awareness and research to this disease.