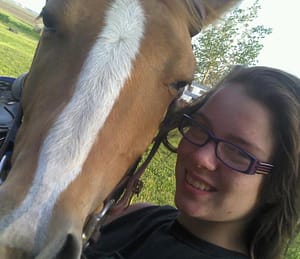 Myocarditis. A word, a disease that no one in our small community had ever heard of until August 2, 2012, when Kristen passed away. Kristen was a 14 year old who knew where she was going in life. She loved animals of all kinds and was determined to become a veterinarian when she got older. From rabbits and chickens to horses and cattle, she wanted to be surrounded by animals at all times. She was a beautiful, headstrong, no nonsense teenager. Kristen was a very active 4-H member, an upcoming FFA member, and was also active with the County Fair. She enjoyed working with young kids and helping them learn about animals.

On the evening of July 29, Kristen wasn’t feeling well, Monday afternoon we went to the ER to be told it was just the flu, so home we went. On Tuesday morning, she was feeling well enough to help set up pens for the FFA livestock show with her older sister, Katie. On Wednesday morning we went back to a different ER to be told that she had a virus and that it would have to run its course and so home we went once again. On Wednesday evening, Kristen went to bed early, still feeling ill and saying it felt like an elephant was sitting on her shoulders. Thursday morning, around 6:30, Kristen was laughing when her Dad left for work, but a few short hours later she was crying with severe stomach pains and made the comment that it felt like she was dying. We put her in the backseat of her sisters car for a short ride to her dads work so we could get a ride from there to the hospital. Three-fourths of the way there Kristen became unresponsive; when we arrived at his work she was pulled from the car and CPR was started. An ambulance took her to the hospital but she never again gained consciousness and passed away at 11:06.