Our sweet, 16-year-old daughter, Lexi had bright blue eyes, a beautiful smile she shared with everyone she met, and an outgoing personality. She loved playing tennis and basketball, but her true passion was riding her horse in western pleasure and english riding events. Lexi was a caring and compassionate teenager that loved Jesus, her family and friends, and her pets. 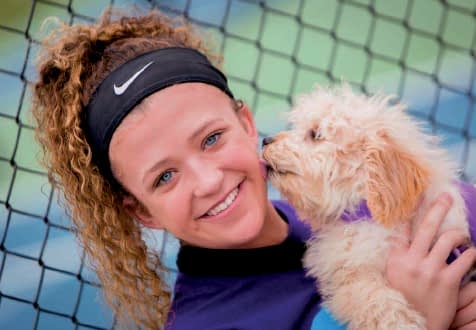 On March 14, 2017 Lexi went into sudden cardiac arrest at tennis practice. Her coach gave her CPR while a teammate called 911. Other students went to get help. The school custodian, who is also a first responder, used the AED on Lexi which saved her life. The ER doctors stabilized her, then life-flighted her to a children’s hospital where she was on a ventilator and sedated for 3 days. When she was taken off the ventilator, we were thankful there was no brain damage. The doctors were trying to figure out what caused the arrhythmia problem. Lexi was born with pulmonary stenosis and had open heart surgery at 8 months old to repair the valve. Was that the problem? Doctors ordered a cardiac MRI, two procedures in the cardiac cath. lab, along with dozens of EKG’s and echocardiograms. The only issue the doctors could find was the valve, although it appeared to be in good shape and they normally wouldn’t repair it, they decided it might have caused the arrhythmia, so they scheduled another open-heart surgery for her. Before that could take place, the doctors implanted a defibrillator and pacemaker. She was released from the hospital after recovering from that surgery.

Lexi was happy to be home and spent the next week resting. She also had follow-up appointments with her cardiac surgeon, her cardiologist, and her pediatrician during the next 2 weeks and discussed having some breathing issues while exerting just a little extra energy; symptoms that also sent her to the Emergency Room twice during that time. They ran blood work and did EKG’s, but nothing showed up and she was sent home.

On April 20, 2017 Lexi was on her way to school, but she forgot something, so her dad drove her back home and she ran into the house to get it, but when she returned to the car she was in pain. Her dad drove her straight to the hospital. The cardiologist said her EKG showed she was having a heart attack. They immediately took her to the cardiac cath. lab, but she went into cardiac arrest and they couldn’t get her heartbeat back. They life-flighted her back to the children’s hospital, but too much time had passed.

We found out 3 months later that she was a victim of myocarditis.

Although there are no words that can describe the soul crushing pain from losing our precious Lexi, her life and memory has been absorbed into the hearts and lives of all of us who loved her.

Our family continues to put our faith and trust in God. I would like to end with Lexi’s favorite scripture.

Trust in the Lord with all your heart and lean not on your own understanding.