Lily was a joyous and healthy 9 year old, and up until January 2017, she was never sick and rarely if ever missed a day at school. On a January afternoon coming home from school with her Dad, she fell asleep in the car. This was unusual but we thought she had a long week at school. She ended up having a slight fever that evening so we gave her fever meds and put her to bed assuming she had the beginning of a winter flu bug. The next day her fever broke but she was still very tired and we had her stay home from school to rest up and drink fluids. That evening she was still not feeling well and had heavy sweating during the night even though her fever had broke. By Sunday afternoon, only 2 days after our first signs of illness, she began to pass out when she tried to stand up. We immediately drove her to the emergency room, where after minimal diagnosis, she was helicoptered to the Joe Dimaggio Children’s Hospital in Hollywood, Florida. Only my husband got to ride with her in the helicopter, so I drove the 3 hours there from Naples. A wonderful team of cardiologists and multi-team doctors met us and started helping Lily immediately. She was diagnosed with acute myocarditis caused by the human parvo virus, which we learned of the virus type a few days after being in the hospital. For many, the human parvo virus is a common childhood illness, but for Lily, her body could not defend against it. After 3 weeks in both the intensive care and the hospital, Lily was able to go home, and after 1 year of heart medications and follow-up appointments with her cardio team at Joe Dimaggio, she is now medicine free, and her heart shows no signs of injury.

We cannot thank her great team of Doctors for their support and love during her hospitalization and post follow-up visits. A big shout out to Dr. Chrisant and her team! A special shout out to “Lotsy Dotsy” the clown who reassured Lily all throughout her stay.  We are so thankful to God for Lily’s recovery and so mindful that it is a devastating deadly disease to many children. Upon moving back to Texas, Lily saw Dr. Jack Price at Texas Children’s for her annual follow-up appointments. We cannot thank him enough for his help with Lily and his tireless efforts on the myocarditis board.

During the year following Lily’s hospitalization, we as a family watched all the seasons of the horse show 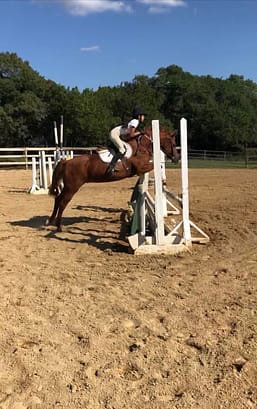 “Heartland”. And once Lily was feeling up to it, she decided she wanted to take equestrian lessons. Now 13, Lily is taking regular equestrian lessons and competing in hunter/jumper events with her very own pony, “Twitter”.

We are telling our story to let other families know about acute myocarditis and to watch your child if they get ill, even with a flu bug, and to keep your child home from school if they are sick so they don’t infect other children. This rings especially true with the coronavirus epidemic. We had never heard of acute myocarditis before entering the hospital so we hope our story will help educate parents on this rare but very serious and often deadly disease.