My daughter, Camila “Millie” Rose Giani was a happy, healthy, energetic ray of sunshine. She had a donut 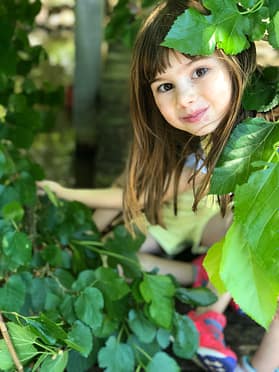 party for her fifth birthday on September 14, 2019. She rarely got sick. She loved dancing, singing, art, and had recently started taking tennis lessons with her sister and best friend, Nora (7). Her other best friend was my husband, Patricio – her Papi. Patricio is an amazing stay-at-home dad who had taken care of Millie since birth.

On October 24th, I was on my way home from a work trip, arriving late. Millie had stayed at my parents’ house because she had a fever and had fallen asleep there. My parents brought her home early the next morning and we curled up together in bed. I took the morning off to just snuggle her. She seemed to be doing well, so we thought we would just let her rest. That night she threw up but then seemed to feel better. Saturday morning, Patricio took her to urgent care. They said it was just a virus, and we just needed to wait it out.

Through the day, Millie was lethargic, but responsive and seemed to have her normal upbeat attitude. Her fever went down. I gave her the medications that had been prescribed by urgent care. I monitored her through that night. She started complaining of pains in her body. I tried to massage her and noticed she was cold. I put an extra blanket on. She started coughing. I asked her to see if she could take a deep breath. She could. I started worrying about sepsis but I thought I was overreacting. We had just been to urgent care after all. But I decided I needed to take her to the ER. She protested. She didn’t want to go. But we got her bundled up, and I drove her to the ER while Patricio stayed home with Nora. We arrived at the hospital a little after 6am. Millie was dead just three hours later.

I told the medical personnel right away that I was worried about sepsis or meningitis. They took her back right away and started tests and antibiotics very quickly. She barely noticed when they pricked her finger. But she joked with the nurses. She bravely offered her arms for the IV to be inserted, which took multiple tries. When Papi called to check on her, she told him “I love you so much, Papi.” Those would be the last words she ever said to him.

At some point her oxygen level began to drop, despite the continuous flow of oxygen she was receiving. We were taken to a trauma room while we awaited a life flight to Children’s Hospital. Millie kept complaining she was thirsty. She said her “belly bell” hurt. I asked her to show me where. And she seized. When they shuffled me out of the room, I felt my life falling apart. How could this be happening? She had a simple virus!

For 45 minutes they did CPR. I went back to the trauma room and saw them pounding on my baby’s chest. I yelled at her that I loved her. Patricio and Nora had arrived at the hospital. Hospital staff waited with Nora while Patricio and I paced and sobbed outside the trauma room. I hear several times “no cardiac activity.” And the doctor said “I have to call it.” All these details – these last brutal moments of such a beautiful life – are forever seared in my memory.

I stroked my baby’s hair, held her hand, and kissed her for the last time. Four hours ago she had been alive. She had a virus. We were waiting it out. And now we were waiting on a coroner.

We were told the likely cause of death was septic shock. No autopsy was ordered, but we wanted more “answers,” so we paid to have one done.  Not an easy decision to make, but it all seemed so sudden and unfathomable.  An autopsy confirmed sepsis, but also found that Millie had viral myocarditis – a one-two punch that was ultimately too much for my brave little girl.  She was struggling to fight a battle against two swift-acting monsters that we never saw coming.

Leaving the hospital without her was the hardest thing I have ever done. Matched only by living every day after without her. I continuously wonder “what if” we had recognized the signs earlier or we had taken her in sooner?

Before Millie’s death, I knew very little about sepsis and had never even heard of myocarditis. Now I know more than I wanted to. And I know it’s important for people to be aware of these issues.

I share Millie’s story because I still mother her even after her death. I feel it is my responsibility to share her death so that maybe others may be educated. I share her life so that others may be inspired, and so that she will stay alive in the hearts and minds of many.

I love you, my Sweet Millie Rose. Forever and ever no matter what.