Beloved Youngest of Four is Lost Suddenly to Myocarditis 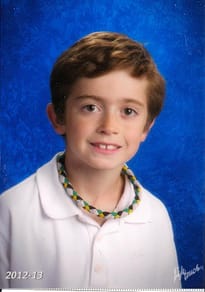 Quinn is the youngest of our four boys. He was fun, funny, loving and athletic. He loved his big brothers, the cabin, road trips, playing catch with dad, and snuggling with mom. Quinn was happy and energetic and full of life! He was in third grade, and had just started piano lessons, excited to follow in his brothers footsteps. Quinn had lots of good friends and enjoyed doing just about anything with them. His favorites were playing hockey and soccer but he was good at everything he tried, a real natural. We had just bought a new puppy, Lucky, for Christmas – mostly because Quinn wanted a puppy so badly, and he adored her.

On January 6, 2013 Quinn had a very normal day it included hockey practice with his team, running errands with his dad Kyle, and more hockey on the backyard rink with dad and big brother Jack. After dinner that evening, Quinn and I made brownies they were baking in the oven. He was playing with Lucky when he collapsed near the kitchen – we thought he was kidding around. Kyle performed CPR and was able to revive him; we called 911, they came immediately, rushing him to the Childrens Hospital Minneapolis. Efforts to revive Quinn were unsuccessful, and after 6 horrific hours they told us…its over. Our beautiful son was gone in an instant. The horror of that night, and the aftermath, are something no family – no child – should have to endure. Weeks later, we learned Quinn had viral myocarditis, and it was catastrophic. His heart didn’t stand a chance. He had no symptoms whatsoever, no indications that something was wrong.

Quinn was one month from his 9th birthday. The house is too quiet without him. Our family will never be the same but we can try to make a difference in Quinns name. We support the Myocarditis Foundation in their efforts to spread awareness about this horrible disease through our pond hockey fundraiser Quinns Cup. This fun event honors his memory while supporting the foundation in their efforts.

We miss and love you Quinn.