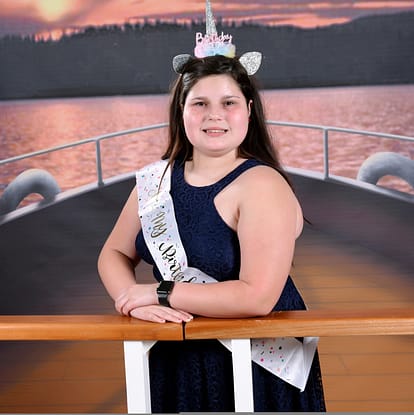 My daughter Riley was 10 years old  when she started complaining of chest pains after having a prolonged cough. We took her to an urgent care facility, and they thought the chest pains were from her cough. They told us to treat it with “over the counter pain medicine” and keep an eye on her.

The next day, the pain was worse, and Riley wasn’t her normal happy self. She was uncomfortable, in pain, and was sleeping more than normal. We took her to the Emergency Room to have her looked at. They did X-rays of her chest, urinalysis, and blood work. Everything came back normal. They discharged us and we went back home.

The next day, three days from the initial doctor visit, Riley was sleeping all day which is not like her. Her lips looked a little purple and her chest was still hurting. Something wasn’t right with our daughter. We took her back to the Emergency Room. When we got a room and they did her vital signs they noticed her oxygen levels were low. They put her on oxygen and started running tests. They kept mentioning myocarditis but told us it was a very rare disease and they didn’t think she had it. They admitted Riley to the hospital and took her to the pediatric intensive care unit.

Once we were in the intensive care unit, they decided she was having heart trouble and it probably was myocarditis. They said they needed to put her on the ECMO machine to help support her heart function. The surgery to put her on ECMO went well. The doctors there though felt that she should be moved to another hospital where they could better care for Riley, as they believed that she may need a heart transplant to survive. They air lifted her to Lucile Packard Children’s Hospital. Riley had to go in the helicopter alone while we drove the 3 hours it took to get to the hospital.

Once she arrived at the hospital, they put Riley in an induced coma for thirteen of the longest days of my life. She was on ECMO for seven days and when she finally awoke, she was confused about where she was and what was happening to her. Riley luckily made a recovery without needing a heart transplant. Her doctors call her a miracle and we as her family, believe she is our little Miracle. We know this rare disease effects everyone differently and we were truly blessed beyond measures to be able to leave the hospital with our daughter.

Today Riley is 12 years old, she still takes medicine for her heart. She suffered Post Traumatic Stress Disorder from her stay in the hospital and is being treated for that as well.

She is thankful for her Doctors and the staff who took care of her and helped her survive her viral myocarditis. Riley is currently volunteering with the Central California blood bank to tell people the importance of donating blood and how it helped save her life and can help others. Raising awareness for myocarditis is also important so that others can get correctly diagnosed sooner and have better outcomes.