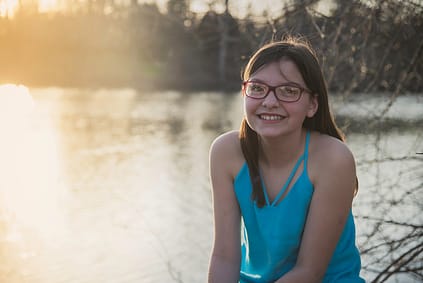 On Sunday, November 24th, 2019, Sarah came down with a virus. She complained of a headache and broke out with a fever. It was nothing high, just a typical viral thing. She was ill the whole week and on Thursday, November 28th, Thanksgiving, I brought her in because she was complaining that her neck was stiff and I worried about other things it may have been.

3 doctors and 1 nurse in the ER all listened to her heart and lungs. Healthy. We were sent home with a diagnosis of possible UTI, due to some slightly elevated white blood cells in her urine. Other than that, we were told she probably had a virus and would feel better soon.

That evening, she started coughing a little. Nothing major. On Friday, it got a little worse but seemed to follow the general pattern for a viral illness. By Saturday, November 30th, she could hardly breathe and couldn’t breathe deeply. She was turning a bit blue and I knew her oxygen levels had to be low. We reached our local ER around 12pm that day. The doctor took one look at her and started running tests on her heart. I had no idea she could be so sick. He immediately began arranging for her to move to CS Mott’s Children’s Hospital, a University of Michigan hospital, because they had the best team around to care for her “just in case”.

On Sunday, December 1st, Sarah was looking pretty good. They were slowly weaning her down on the bi-pap machine and she was making what looked like great progress. She was mad she couldn’t eat or drink, so we made plans of what I would bring her when the mask was off. She was joking around with us, being a bit sassy, and just overall looking and acting like herself again.

Our world crashed the next morning when she went into cardiac arrest around 5am Monday, December 2nd. She coded for a long time while they hooked her to the ECMO bypass machine and got her on the ventilator. We thought that her body may need a bit of a break and it was the best course of action. We were so hopeful that after a little time on the machines, she would begin to improve. Little by little, she kept showing us signs that she was struggling, even with the best support they could give her.

On Tuesday, December 3rd, Sarah went into cardiac arrest again and coded. Her father and I were right there when it happened. It was that point that we realized she was gone, and our sweet, sweet girl couldn’t fight anymore. We asked them to stop because they couldn’t get her back; they knew it and we knew it. It was the hardest thing in the world to admit. At 9:52am, Sarah’s sweet, kind, loving, but ravaged heart ceased to beat.

Our world is shattered, but we are hopeful that someone, someday, will find a cure or find a way to stop this horrible, horrible illness so that no other families have to watch their child’s story end like this. Sarah didn’t deserve to leave this world a month before her 13th birthday. She didn’t deserve to miss Christmas with her family. She was just a kid who got sick, like all do once in a while. We love you, Sarah Elizabeth. #SarahStrong