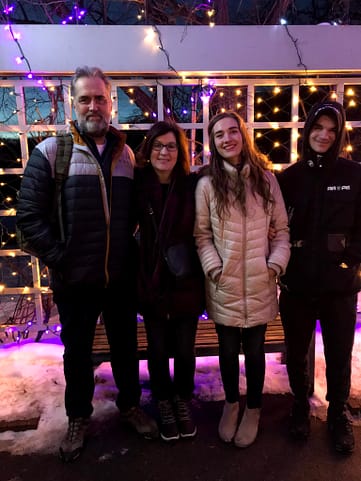 Labor Day weekend was finally here which brought with it a few extra days off. I was excited for the break in my hectic work schedule. For about a month, I had been feeling a bit run down, had been having some difficulty sleeping and basically feeling like I was coming down with something. Taking advantage of the day off, I decided to work on the deck at home. I made a trip to the big box home improvement center and got to work on the handrail. As the day progressed, I was starting to feel a little worse. Climbing stairs seemed to wear me a bit which was highly irregular for me. I decided to take a break and lay down a bit. I was starting to cough quite a bit, even to the point of causing me to vomit. My wife finally convinced me to go to urgent care. After the examination, I was given a chest x-ray. I was sent home with a bottle of anti-biotics and the recommendation that I make an appointment with a cardiologist since my heart seemed a little enlarged.After returning home, I tried to lay down a bit and get the mess cleaned up from the house repairs (knowing that I didn’t have the

strength to continue it today). After a couple of hours, I began to feel worse and my wife once again convinced me to get medical treatment. This time, we opted for the emergency room. I was sort of out of it at this time but can remember lying on a table, hooked up to an EKG with a team of “white coats” gathered around the printout, shaking their heads. I was roused a couple times and told to clench my abdomen to try to get my heart back in rhythm. My wife was informed that there was nothing that they could do for me other than to insert a balloon pump and transport me to the U of M Medical center. My wife was instructed to have the kids drive in because they didn’t know if my son and daughter would get another chance to see their dad alive.I have always been a relatively active individual. I have consistently had low cholesterol, low blood pressure. Other than antibiotics for an occasional sinus infection, I have never needed any prescription medications. If someone would have given me a list of possible ailments, heart disease would be at the bottom of my possible conditions but here I sit, 52 years old with an EF of 15 and wild arrythmias Looking back at the six-month period prior to going to the ER, I now see some areas that should have been indicators to my condition I had a few isolated instances where I had gotten extremely short of breath. The incidents lasted for only a few moments and were dismissed as having gotten up to quickly. If I wasn’t working, I would fall asleep as soon as I sat on the couch. This was dismissed as having a busy schedule in combination with getting older. I also had a progressively worsening cough which was dismissed as coming down with a virus that seemed very similar to what a coworker had.I arrived at UMMC and was brought to the ICU. The balloon pump had provided adequate assistance to stabilize my heart, to a certain extent. I laid in the hospital for a few days until the balloon pump could be removed and testing continue. Even before testing was completed, my cardiology team was leaning towards a Giant Cell Myocarditis diagnosis. The first biopsy came back negative, but it was decided to perform a second biopsy since a missed GCM diagnosis could prove fatal. The results came back from the second biopsy and the results were positive. I was placed on a regimen of anti-rejection medication to try to hold back the progression of the disease. After a long period of testing and medication tweaking, my arrythmias seemed to be a little better controlled.I was able to stay active during my stay in the hospital and for the most part, I didn’t feel any different than I did prior to the events that brought me to the hospital. I was constantly being told that I was the one person in the ICU that didn’t appear to need to be here I had one cardiologist who informed me that I was both the healthiest and sickest person on the floor. After about a month in the hospital It was decided that I could return home with a life vest and I would continue to be monitored to see if the medication was having any affect. I had everything packed up and my wife was on her way to bring me home when the nurse came in to ask me how I was feeling. This had become a common occurrence. I would consistently have runs of arrythmia which would sometimes turn into V-tach (especially at night). I informed the nurse that I was feeling fine. I was typically asymptomatic during these events except for the occasional shortness of breath. My eyes popped open and I realized that I was surrounded by a team of medical professionals that were performing CPR on me. I had coded during the conversation with my nurse. It was then decided that my condition was too unpredictable and that I would be returned to the ICU and the workup for transplant would begin. With my height (6’5”) and an O blood type, I was braced for a long stay at the hospital. Even being listed as a Status 2E, I was faced with having to contend for a heart from a rather limited supply. After 2 months in the hospital, I received the call on the morning of October 27th and was informed that a match had been found and that I would be transplanted that afternoon. The operation took around 6 hours. I started to feel better after about 4 days but my stay in the hospital lasted another week while I waited for chest tubes to be able to be pulled. I returned home on November 9th. I remember walking through the parking ramp during a light rain. It was the first time that I had breathed fresh air in 71 days.My recovery has been nothing short of miraculous and is a testament to a faithful God, the power of prayer, an “at the buzzer” diagnosis and a dedicated team of medical professionals. Sometimes it seems like this experience was a one-time event and that the transplant took care of the issue. I needed to realize that Giant Cell Myocarditis is a disease that can reoccur (not frequently though) in the transplanted heart. The transplant gave me a heart that hadn’t been destroyed from the disease. I have to be faithful to taking my anti-rejection medication, paying close attention to how I feel, and working closely with my transplant cardiologist. I have shifted direction in my life to become the best steward of this gift which came at such a cost. Thank you to my donor and all those who “Donate for Life”, so that others like me can live.