Yvonne McArthur and her family held an awareness event/fundraiser on Saturday November 3rd at the beautiful Liuna Gardens, on Lake Ontario, Canada. Over 100 attendees can now speak some to what Myocarditis is and share the information with others. 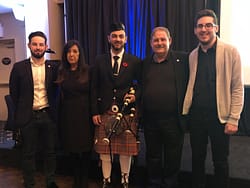 Yvonne lost her 21-year-old son Ryan, to Viral Myocarditis on November 1, 2016, after a valiant 4 ½ month fight with the disease. Yvonne and her family, like so many others, had never heard of myocarditis before it was spoken about to them by the physicians in the ICU. She went to the internet and found the Myocarditis Foundation (MF), where she learned more about the disease.

Yvonne, who does not like to fly, rode in a bus from Canada to NYC with her younger son Brandon, to attend our 2017 and 2018 Family Meeting, and the 2018 Gala. She has verbalized over and over that if it wasn’t for the MF, she doesn’t know what she would have done. The support that was shown her and Brandon from the MF and by the other attendees at the meetings was monumental in helping her to deal with their devastating loss. The fact that Dr. Cooper sought her out and spoke with her at her son’s “Not a Blank Canvas Poster” of Ryan, with tears in his eyes, meant so much to her. Brandon was especially thankful that he was able to speak with Dr. Hanson, a young researcher and 2017 MF Fellowship Grant Recipient and fellow Canadian, about his brother and the disease that took him from them. 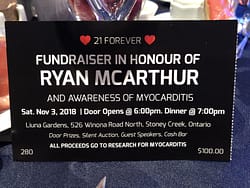 Her event titled, “21 Forever”, was a combination of a tribute to Ryan, awareness event and fundraiser. Brandon, Ryan’s younger brother, compiled a video presentation as a tribute to his brother. the MF Founding Video was shown, as well as the slide show of victims and survivors from the 2018 Gala.

The evening started with a bagpipe rendition of “Braveheart”, which Yvonne thought was a perfect selection in light of 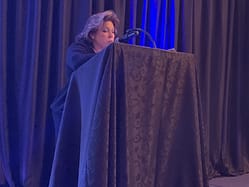 the disease. The young bagpiper (Adam) was the same age as Ryan was when he was struck by Viral Myocarditis.

Gen Rumore, Executive Director of the Foundation spoke briefly about the beginnings of the MF, it’s mission of providing education and raising awareness on myocarditis, and about the Myocarditis Foundation’s BioBank. The BioBank has been able to be started through the generosity of our family and friends donations.

Dr. Hanson, the MF Fellowship Grant Recipient from 2017 spoke about his research and the need to find a universal 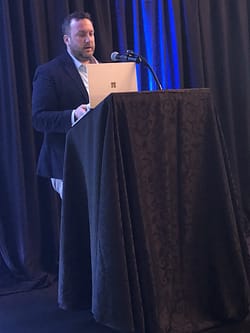 blood test for myocarditis. A universal blood test would make myocarditis easier to be diagnosed whether you are at a small community hospital or a large teaching hospital. His power-point presentation visually demonstrated his research and the potential for finding that biomarker that could help to diagnose myocarditis in a very timely manner. His lab is presently starting to test his theory on human myocarditis blood samples that the hospital in British Columbia has been gathering. Dr. Hanson believes that with the help of the Myocarditis Foundation’s Biobank’s blood samples, the research will be able to move forward in a more-timely manner with the additional number of samples to test his theory on.

Thank you Yvonne, and thank you for the generosity of so many who participated in or donated items for gift baskets in the silent auction and gift bag raffles, or just who bought tickets and participated in the evening.. Clearly the support noted at this event was a testimony to what a wonderful young man Ryan McArthur was. 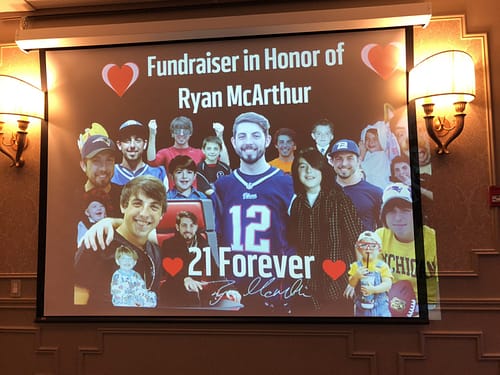