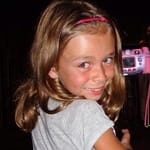 The Boslem family lost their beloved eight-year-old Lucy B to myocarditis on July 17th, 2011.  Lucy was a sweet, happy, and vibrant girl that “could light up any room that she walked into.”  As part of their healing process and through their dedication to raise awareness, they organized an amazing fundraiser in their town of Lanarkshire, Scotland.

Nicole Boslem, Lucy’s big sister submitted the following summary of the event they held to honor Lucy B and to bring awareness to the disease that took her so suddenly from their lives:

“One of my mum’s friends from work, Glynis wanted to organize a charity night and approached my mum to ask if she could do it in memory of Lucy, as she knew what had happened with Lucy and was aware that there were many people that were unaware of what myocarditis was. As a friend she wanted to raise as much awareness as she could and dedicate the night to our Lucy B. We contacted local companies and spread the news through networking sites and though our friends and family so that as many people knew about the fundraising night as possible.

On 3rd May 2013, approximately 200 people attended the night. We had decided to not only print and display Lucy’s story, but also other stories from the Myocarditis Foundation’s site to show that it can happen at any age and to show how many people’s lives that myocarditis has affected.

We gave out raffle prizes and had contacted many different companies who had given very generous prizes. We also ran an auction on the night as well. A local radio presenter also attended on the night and the following morning on his radio show he very kindly done a spread on Lucy and myocarditis.

The local newspaper also done a spread and my mums friend who organized the night has a niece who works in our local hospital and she has now printed Lucy’s posters and has put them up in the hospital to continue to raise awareness of myocarditis. This is also the hospital that Lucy attended before she sadly left us.

From the night we managed to raise £4650. We want to thank everyone who contributed. There are so many people to mention and the whole night was so overwhelming for the family but we would like to thank Lindsey from the Myocarditis Foundation for all her support and information she sent, Glynis for all her hard work, Steve Mckenna from the real radio show, the Hamilton advertiser for doing a spread on the night, Wishaw General Hospital who have put up posters to continue to raise awareness of myocarditis, and of course our friends and family who continue to support us all year round as couldn’t do it without you as we continue to live without our beautiful Lucy B.”  – Nicole Boslem

We thank the Boslem family from the bottom of our hearts as well as the many friends and family members who came to show their love and support.