The second day of the Summit and the 3rd day, which was geared for members of NORD, continued to share the awareness being raised on what is happening in the world of rare diseases.

It often takes many years for a diagnosis to be made in a person with a rare disease. Because of this, there is now a Disorder specified as “Rare and Undiagnosed Disorders,” and in April 2016 Gina Szajnuk was named the Undiagnosed Advocacy Ambassador. This category just means that the person has a rare disease, and it either has just has not been classified as of yet or that the rare disease that the person has, has not been properly diagnosed yet for that particular person. This basically was instituted because there are people with health issues that have not been able to be classified into a specific disease state, and yet they have definite complaints and health issues. In the past, these people may have been told that their symptoms were “all in their head.” 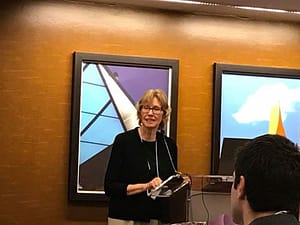 NORD speakers highly recommended that the most important things that patient groups can do consist of the following:

Doesn’t this sound familiar?  This is exactly the Myocarditis Foundation’s mission, which we carry out every day in every way we can.

The 3rd day, which was specifically for the member disease groups of NORD, will be very helpful in planning and gaining assistance with concerns that we as a Foundation may be experiencing.

In the past year, NORD has started educating medical students of every discipline (doctors, nurses, physician assistants, etc.) on learning about rare disease. These students have given very positive feedback to NORD on their experience with this educational opportunity into rare disease. While the older populations of the medical community often still take the opinion, “It is rare and we will never see it in our practice…”, the younger community is anxious to learn as much as they can about these diseases.

NORD is also starting a Rare Disease Video Library, “Journey to Diagnosis”, where physicians and medical students will be able to view 2 to 3 minute videos on a specific disease. They recommend it include 3 parts…Interview with a doctor, interview with the patient or family, and finally an interview with a representative from the foundation explaining what the foundation does for the patient, family and disease. I will be looking at doing this for the MF in the very near future.

There is so much more happening at NORD these days in the realm of educating others on rare diseases. A quote from the NORD Undiagnosed Ambassador, Gina Szajnuk, is as follows: “We’re stuck in the undiagnosed and we’re not going to get out of it unless we collaborate.”

“Alone we are Rare, Together We are Strong…Together We Can Make a Difference…”  NORD