The 2015 Myocarditis Foundation 3rd Annual Family Support Meeting was held this past weekend, September 25 & 26th in National Harbor, MD at the Gaylord Resort and Convention Center. The purpose of this event is to support and bring together families whose lives have been affected by myocarditis. This year’s meeting was attended by over 75 people, including families of victims, survivors, researchers, doctors and Myocarditis Foundation board members. Past meetings have been held in Point Pleasant, NJ and Orlando, FL. 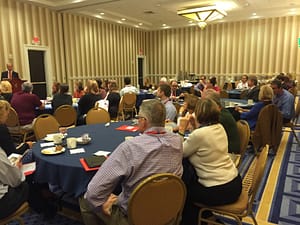 The meeting started Friday evening with an opening dinner in which everyone was able to talk in a casual setting to others in attendance, tell their story and get to know one another. The dinner was followed by a candlelight vigil held by the Potomac River. The touching vigil was led by Reverend Brian Brandt, a myocarditis survivor and heart transplant recipient. The candlelight vigil ended with an impromptu accapela rendition of “This Little Light of Mine” lead by Carolyn Sweet, mother of Logan Sweet who passed away at the age of six, everyone at the vigil joined in the singing.

Saturday morning began with clinical presentations about myocarditis and the 10 year journey of discovery in the field. Presenters included Dr. Steven Colan, Dr. Silvio Antoniak, one of the first myocarditis grant recipients, and Dr. Leslie Cooper and Dr. Jack Price, Myocarditis Foundation board members and physicians. Dr. Cooper spoke about where we have been and where we are today in terms of myocarditis. Some key points made were that the global burden of myocarditis in 2013 was 1,481,000 cases or 22 per every 100,000 people and if we can identify myocarditis early we can stop the advance to chronic heart failure. Dr. Price discussed that most cases of myocarditis in children are due to viruses, that myocarditis is a recoverable disease if caught early enough but many physicians miss it. Dr. Price also stated that 68% of childhood myocarditis occurs in males. 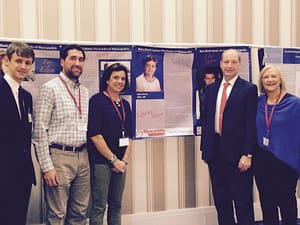 ton D.C spoke about his journey with giant cell myocarditis and transplant in 2011.

Dr. Kimberly Battle and Dr. Coralease Ruff from Compassionate Friends presented about dealing with grief. Compassionate Friends is a peer support group of bereaved parents and siblings that was started in England in the late 1960’s and came to America in the 70’s. Some key points that they discussed was that grief has no time frame grief, and is a normal natural reaction to death of a loved one, and that grief is a complex process.

The last presentation of the weekend was given by Dr. Michael Bode from University of North Carolina Chapel Hill. Dr. Bode is the 2015 Quinn M. Kirsch Memorial Grant Recipient for the Myocarditis Foundation. Dr. Bode’s research project is titled “Role of PAR-1 in a Mouse Model of Viral Myocarditis” which investigates a protein involved in blood coagulation’s role in protection during myocarditis.

The Family Support Meeting was hosted alongside the Heart Failure Society of America (HFSA) Conference in order to allow physicians and researchers to attend the Family Support Meeting. Dr. Leslie Cooper chaired a HFSA presentation session with four top myocarditis researchers and physicians discussing the advances in myocarditis detection and imaging. The session was very well attended with over 300 physicians at the presentation. 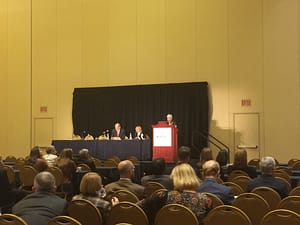 kend ended with a group dinner at Rosa Mexicana Restaurant overlooking the National Harbor. An awards ceremony was held to honor those who have made major contributions to the Foundation over the last 10 years. Awardees included the families who have raised the most funds for the Foundation over the years; The Vanness Family, The Kirsch Family, and Joe Rumore, as well as The St. Jude Medical Foundation who has funded grants for the Foundation every year since inception. This year the $25,000 grant from St. Jude was used to fund a video project where families and board members were filmed though out the weekend in order to tell their “Myocarditis Story”. These videos will be used on the website and facebook page as well as at fundraising and awareness events. Awards were also given to those who have been involved with the foundation from the beginning, including Dr. Dennis McNamara who has been on the Foundation Medical Advisory Board since the founding, and Co-Founders Dr. Leslie Cooper and Candace Moose. Candace was also surprised with a leather bound book containing letters from those whose lives she has touched. 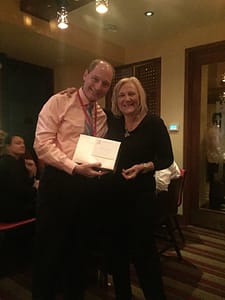 The weekend was incredibly successful and rewarding to all who attended and we look forward to continuing to host an Annual Family Support Meeting each year in order to bring together those whose lives have been affected by Myocarditis.

Thank you to everyone who attended this year’s Myocarditis Foundation Family Support Meeting and we look forward to seeing everyone next year. Please don’t hesitate to contact the Foundation if you need anything or have any questions, we are here to support each and every one of you.