On Sunday May 21, 2017, the Do-Re-Mi School of Music, in Livingston, New Jersey, held a musical recital in memory of one of their students, Christopher Widjaja. He was a 10-year-old piano student who suddenly died from Viral Myocarditis in 2015. His younger brother, also a piano student, continues with his studies there and performed in the recital.

There were so many amazingly gifted students that performed, that they needed to split the recital into two sessions. The students ranged in age from 5-12 years-old and performed selections from the classic composers, Bach, Beethoven, Debussy, Tchaikovsky and many others, in memory of Christopher. 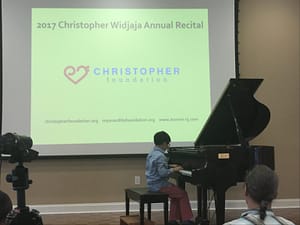 Christopher was a piano prodigy who was scheduled to perform at Carnegie Hall a few short weeks after his passing. His brother, Carson, 9 years-old, performed a couple selections and will be performing at the end of June at Carnegie Hall as well.

Many thanks to the Widjaja Family for their continued support of the Myocarditis Foundation.