Patty Edgeman, mother of a Viral Myocarditis victim Clayton Edgeman, wanted to do something to raise awareness for the disease that took her son on May 17, 2016 without warning. 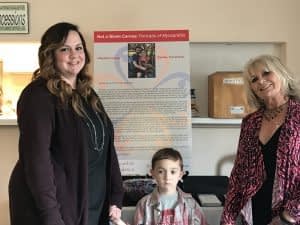 Clayton, was a hard worker who never missed a day of work in his life until this day when he did not arrive at work as scheduled. His mom and co-workers new that something was wrong and went looking for him. They found him unresponsive in his apartment and after three months learned that it was viral myocarditis that took his young life leaving behind a 4 year-old son.

Patty reached out to our website and contacted us for more answers. She wanted to do something in Clayton’s memory so that others would learn about this disease and what could be done to help stop it from devastating others like it did to her family. She asked what could she do as an awareness event/ fund raiser, and was referred to our Fundraising Guidelines on our website. After speaking with a dear friend of 40 plus years, her friend Priscilla offered to help by enlisting in her son, Matt Cordell, who is a national and international entertainer and Elvis Impersonator/Singer. Matt donated his time and beautiful gift from God, his voice, to help raise awareness and funding to help the Myocarditis Foundation in Clayton’s memory. The Tennessee Valley Theatre donated the venue for the event as well.

Matt put on a 2-hour show as Elvis Presley, that his daughter Madison, also a singer, sang in with him. Matt sang many Elvis Presley songs from the 2,500 songs that Elvis recorded over the years. This is his family business back in Pigeon Forge, Tennessee, where his mom, Pricilla, was also a singer, Dad, Ken, works the lighting and wife Tashia helps with the sound system. Matt has been around the country and on cruises performing, and has come in first place in multiple Elvis competitions. He also does charity work such as this fundraiser and performs in nursing homes when able with his busy schedule.

The Myocarditis Foundation was present and spoke about the disease, the Foundation…where we’ve been and where we are going with research, education, and support for those going through the disease, with our singular goal of saving lives. There were auction items that were donated and raffled off with the Grand

Prize of a La-z-Boy Recliner, that was donated by the La-z-boy company for the event. There was a lot of verbal interaction with the audience after the show with much education and awareness on the disease, not to mention pictures with “Elvis”.

Hope We See You There…