June 8, 2018 was another beautiful day in Marion, Iowa for the Sarah Knight Memorial Golf Tournament.

The excitement of the golfers as they lined up and drove their golf carts off the parking lot onto the golf course was a sight to see. It was a never ending line of them, too many to count, with about 140 golfers in attendance, their largest event yet. Waiting back at the start were the family and friends who helped support the outing while awaiting the 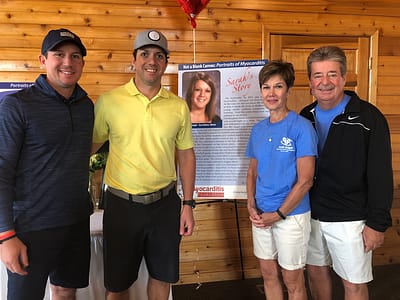 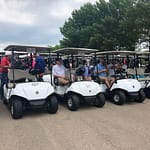 golfers return. The amazing family and friends, daughters-in-law, grandsons, were all a special part of the day, remembering Sarah and all that she stood for and did for others, especially her young students..

This year was a special event as the 2017 Myocarditis Foundation Fellowship Research Grant was awarded to Dr. Paul Hanson, of Vancouver, British Columbia., with the funds that were raised by the Knight Family through this annual tournament. 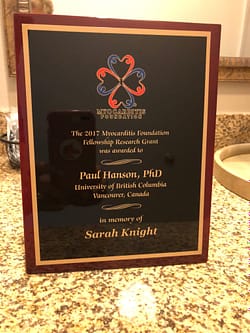 This grant was named in honor of Sarah Knight, who was taken suddenly by Viral Myocarditis in September, 2011.
Sarah, was a 25-year-old, bilingual kindergarten teacher, who was starting her second year of teaching. She had received her degree in Education from Western Illinois University.

Unbeknownst to the Medical Advisory Board, who review the applications and make the suggestion as to whom should receive the Award, Dr. Hanson’s mother also had attended West Illinois University, received a degree in Ed 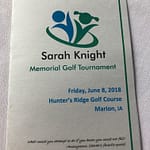 ucation and also was a kindergarten teacher.

The Knight Family and Dr. Hanson hope to get together at some point in the future. Each of them are anxious to meet and thank the other for what they are doing.

The Knight Family are planning another Golf Tournament for 2019, date to be announced.

A big thank you to all those whose hard work with planning and support made this event a success!