On May 21, 2014 we lost our beautiful, healthy, and active 19-year-old son Tyler to viral myocarditis. Tyler was bright and funny and was just getting his life started. Ty loved all kinds of music and was an avid bass guitar player. He enjoyed sketching manga-style cartoons and writing poetry. Tyler’s favorite rock groups were The Doors and Stone Temple Pilots. He was captivated by the TV series “Breaking Bad”, and loved to discuss the show with his many friends. At his funeral, all of his friends that spoke claimed Tyler was their best friend.

On that day, Tyler had just driven home from his girlfriend’s house to shower and get ready for work. My wife was running errands at the time, and received a call from him to come home immediately because something was “very wrong”. He was panic-stricken and couldn’t explain what the problem was. She found him collapsed on the bathroom floor, still conscious, but ashen gray, sweaty, and with a very faint, rapid pulse. He complained of severe chest pain and was very short of breath. 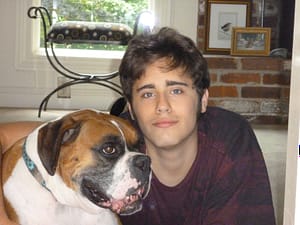 An ambulance brought him to Yale New Haven Hospital and at the moment of arrival, he went into cardiac arrest. They performed CPR and were able to revive him but then he proceeded to arrest a second time. After he was revived again, the doctors performed a cardiac ultrasound, which showed what the doctors called “McConnell’s sign” and also, a massive dilation of the right ventricle of his heart. From these observations, they assumed he had a massive blood clot in his heart or lungs. They administered TPA, a clot-busting drug and waited for it to work. Tyler then coded a third time and was again brought back with CPR. This time his coloring improved and he appeared somewhat better. Despite his heart stopping three times, he regained consciousness and was still mentally intact. The nurses and doctors thought that he had responded to the medicine and they felt optimistic about his recovery. He was transferred to intensive care and at that time, we all thought he had turned the corner; he would spend a few days there and then he would come home. Soon after he was brought to intensive care, his blood pressure started to fall and his heart started beating very rapidly. Tyler’s labs showed liver and kidney failure, and his blood ph was highly acidic, the result of his heart failing. The doctors administered all the medications they had to try and bring his blood pressure up and stablize him, but nothing worked. Tyler then coded a fourth time and despite performing CPR for 45 minutes, they weren’t able to revive him. In the end, with his mom holding his hand and his older brother and dad by his side, Tyler died. There was nothing anyone could do to save our son.

Almost 3 months later the autopsy report showed that Tyler hadn’t died of an embolus, but of Viral Myocarditis. He had never had a blood clot. Because myocarditis is relatively uncommon, we don’t feel that most ER doctors have the exposure and experience with this disease. If the doctors at a teaching hospital such as Yale aren’t aware of this disease, it can be safely assumed that very few doctors are. From the moment Tyler entered the hospital, we don’t feel that myocarditis was ever considered.

I took the autopsy report and Tyler’s medical records to my cardiologist and asked the questions, “If Tyler had shown symptoms or had complaints earlier, before his collapse, would he have survived with treatment? What could have been done to save him? Would he even have been correctly diagnosed?” My cardiologist answered, “With the amount of heart damage Tyler had, he would have placed him on a transplant list.” From the moment Tyler contracted this silent killer, myocarditis, his only hope of survival would have been a heart transplant.