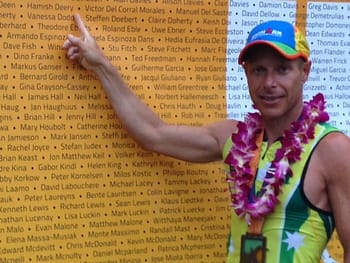 The alarm went off at 4:15 am but I was already awake. The rest of the family was bleary eyed but also up and ready for the long day head. We ambled the 2km from our rental condo town to transition. The tension was palpable race morning as the 2,200 athletes were body-marked with race numbers and made final arrangements in transition with their bikes, pumping tires and filling drink bottles. I felt pretty calm, the overwhelming feelings were anticipation mixed with some apprehension and nerves.

They ushered the male age groupers into the water about 6:40 am, and as we dreaded water at the start line waiting for the cannon to go at 6:50 am. I just tried to soak in the atmosphere from the thousands of supports on the pier and shoreline. The cannon fired and the race started with a relatively flat sea for the swim, and it was down to work. My swim went quite well, I was a few minutes quicker than I expected, and even had the pleasure of seeing a small Manta ray on the back half of the course. I exited the water feeling good, and ready for the long bike ride, not realizing what lay ahead …

My strategy on the bike was to ride the first 60km or so steady but not push too hard, to conserve energy for the long day ahead. My bike must have looked like a rolling smorgasbord of sports products – electrolyte tabs, energy drink, water and energy gels – and I focused on getting as much in as possible while my heart rate was reasonably low.

At the 40 km mark, you come down a sweeping hill to a flat section before a town call Waikoloa. Suddenly we were confronted with probably the strongest headwind I have ever experienced on a bike. I was riding in my smallest front gear on the front, and also the back, doing 15km/h on the dead flat for about 10km stretch. I had in the back of my mind that at least we would get the benefit of a tailwind on the return journey.

We then started a 20km or so gradual climb to the town of Hawaii, the turn-around point for the bike. The wind was now across us, and I had to lean about 30 degrees to the right to stay upright. It was relentless. But once I hit the turn-around, it was a flying decent back down, the scary at times with the cross-winds again but this time travelling at speeds up to 60km/h.

When I hit the road out of Waikoloa, the tailwind blew for about 5 km, but then suddenly the famous “trade winds” turned and we had a headwind the whole way back. The commentators said it was the worst winds conditions for 17 years, and the locals who competed (and train here) described it as the worst conditions they had seen! I focused on keeping my cadence up and getting in the nutrition for the long run ahead, wanting to get off the bike relatively hydrated. With all that, I finished the bike in 5 hours 28 minutes, a solid ride.

I started the run feeling quite good, the first 15 km I passed my family twice, which was a nice boost. The course was lined with thousands of people, cheering, and with my Australian trisuit, I was getting numerous shouts of encouragement and the “Aussie, Aussie, Aussie” chant. As I headed out of town towards the Energy Lab, my spirits dropped a bit as the crowds thinned and it was just the highway, heat, humidity and wind. I battled on, trying to set goals of getting to the next drink station each time. When I turned around at the Energy Lab and started the 12 km trek back to town and the finish line, I got a bit of a boost mentally. It felt like a slow, shuffle but at least I could count down the kilometers to the finish.

When I hit the edge of town, it was only 1.5km of downhill and flat to the finish line and it was the thought of completing the race pushed me to keep running. The last 600m or so down the finish line, I grabbed an Aussie flag and soaked in the electric atmosphere. The streets were lined 8-10 people deep, cheering and yelling. I saw the family one last time with 200m to run, and celebrated all the way to the end.

After some recovery time, a shower and lots of fluids, we wondered back into the finish line around 9 pm for a few hours to support the athletes coming in. This was truly inspirational, sixty and seventy year olds who had pushed themselves to the limit, finishing in the dark. But the crowd was buzzing even more at this stage, as they cheered the athletes home. I slept quite well last night and although walking a but gingerly this morning, overall feel quite good today.

A few final stats – I finished the race 3 kg lighter than when I started, and calculated I consumed 16.5 liters of water / Gatorade, 12 energy gels, 15 electrolyte tablets, and a few cups of degassed cola. My “power” on the bike was similar to my recent races in cool conditions, and my run just a few minutes slower. I finished in 10 hour 23 minutes, was 131 in my division (out of around 360 or so) and 631 overall.